Today's topic isn't so much about agile or coaching, it's about abuse and abusers and the line between the good guys and the bad guys.

It's amazing how often I come a person who argues that some person in authority is unfair to them or others, and should not be allowed to behave in such a way.  Sometimes, it's not really abuse, it's just inconvenience or a different vision on what should be done and feelings were hurt.

Sometimes it's about one person steamrolling others to get his or her way, which is an abuse.

Other times to seize or impose control rather than to align and work together, which is unfair and unkind, and probably a kind of abuse.

Sometimes it is personal and vengeful or wrathful, and is true abuse.

It is a human phenomenon (well documented here) that people will sometimes misuse their power to mistreat people, even while providing a good face to their own bosses. This "kick down, kiss up" strategy works for some people for some time.

Peace and joy should then rule, and the world should be a happier place, right? 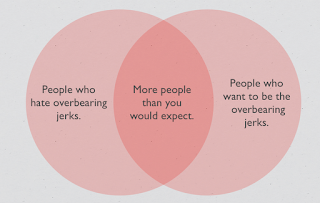 Well, no. Quite often A will begin to do the very same things that were unfair when done by B. How can it be? Isn't it the same unfair behavior?

It is and it isn't. Sometimes the problem is not really "he shouldn't be allowed to abuse me," but rather "why should *he* be the one who gets to do the abusing?"


It may well be that the behaviors that other people perform in their position of power seem perfectly reasonable to someone in their position, even though it seems unfair or abusive from a lower-ranking position.

We tend to commit something called the Fundamental Attribution Error, in which we attribute other people's actions to their character alone whereas we consider our actions to be primarily a matter of the circumstances we find ourselves in.

We attribute the behaviors of others to their character, even when circumstances and character may be weighted quite differently in the minds of the people whom we are observing.

It may well be that when we are in the same circumstance as the alleged abuser, we find that we make similar decisions, perhaps choosing coercion or force in hopes of an expedient change in behaviors of those around us. The new circumstances give us a new perspective on problems.

One hopes that if a leader in the new circumstance can be more transparent and open, then the team will reach alignment that will allow progress without coercion, and with the "us/them" line moved entirely out of the team space.

Sometimes A is mad because B can abuse people, but A cannot. It would be "fair" enough if A could pass out the abuse too. This is a classic "meet the new boss; same as the old boss" scenario.

Note the slight change of perspective (see Fundamental Attribution, above) but in this case there is an assumption that abuse is part of the natural order of things -- it is the culture. If the abuse system is unchangeable/natural/inevitable, then it's clearly better to be the abuser than the abused.

What we really long for is a sea change, where abuse and force are recognized as choices not necessities. Systems can change, but system change is more work and needs alignment. A change from an abusive system to an inclusive one tends to have little support from the people who feel that they are "winning" in the abuse system - but often we find that they also are unhappy with the posturing and coercion and long (as people together) for something better.

Okay for the Good Guys


The brain has various survival mechanisms to protect the ego. There is a self-serving bias in which we tend to consider ourselves the good guys.

Kids at play like to be Batman, and it is hard to convince a kid to play the Joker, Riddler, or any other "bad guy."

Likewise, your own political party is a fair-minded group of thinking people who want the country to be great. Your denomination has the best theology. Your high school football team is the best, and only failed to win the state tournament because they didn't have a fair chance against the bigger schools.

On the other hand, the brain is less charitable toward our fellows, due to a Hostile Attribution bias. When someone else does a bad thing, we know in our heart of hearts it was merely exposing the fact that they are bad people.

For the "good guys" (us) it is a different story. We only trip over faulty shoelaces. When we can't find a belonging, it is because someone moved it; they may have stolen it. If we spill coffee, it's because the cup is defective or we were distracted or jostled, or it was just a meaningless accident.

The same action taken by us or them will have two different interpretations:

The "good guys" would only do a bad thing if they had a really good reason, in the pursuit of a more pure and just ideal.  It's up to the good guys to give the bad guys the punishment they deserve.  After all, by being bad guys they brought it upon themselves. They can't be allowed to get away with it!

The line that separates the good guys from the bad guys? It's the us/them line, whether a political platform, an org chart, a national border, a race or nationality, a religion, or a difference in philosophy.  Those who aren't part of our group? Those who disagree? Out-group bias says they might be the bad guys.

Only we should be allowed to invade countries, fire coworkers, rudely demand service, refuse to tip, steal parking spots, dawdle at work, cross streets in long diagonals while drivers wait, cut people off off in traffic, yell abuse at other drivers, post rude and sarcastic comments, take opportunities at other people's expense, and receive subsidies.

After all, we're the good guys.

Otherwise it wouldn't be fair.