Circling the Drain/Facing the Truth

Messages from the past have a way of reaching into the future and getting your attention.

This week everyone is talking "apocalypse." This is because of an ancient mayan calendar which quits tracking time on Dec 21st. The joke (I hope we all know it's a joke) is that it stops because that's when time ends. Of course, my calendars used to run out every year (before Google Calendar).

The word "apocalypse," according to my sources, was a theatrical term. It referred to the moment when the curtain was pulled back and all was revealed. When I learned that, the title of the biblical book "Revelations" finally made sense, as did more of the text within. 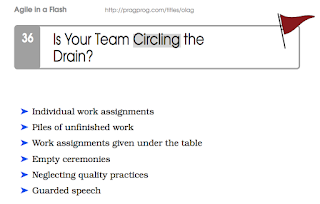 Today I'm facing my own apocalypse. An ancient message (from two years ago) has come back and presented itself to me.

I like this team. They're good people, and they understand their business. They write quite a lot of code, and they get along. There is nothing to dislike, and much anyone can learn from them.

On the other hand, I don't get any takers when I want to pair up and teach testing, refactoring, and other code quality practices.

The card keeps popping up, either when I page through my AgileInAFlash deck or when I am quietly contemplating the team and my experience here (success mixed with confusion and frustration).

The fact is, the team is not growing as a team. They are at best holding steady and coping. They are learning about code smells and have seen some demonstrated skills, but there is not a strong uptake.

Are they circling the drain?

The voices of Ottinger & Langr from two years draw my attention to difficult facts:
The item we didn't know to put on the card is "situational awareness." It's the military concept that people are aware of position, direction, intention of teammates and the location, direction, and intention of hostile forces. They know their situation, and it enables them to act in a manner that their teammates can anticipate and work with, but that their enemies will find frustrating and possibly devastating. You have to know your situation.

I fear that the team does not have good situational awareness. In my few weeks here, I've never had a sense of how the team and it's products are tracking. There isn't a "customer" (XP sense or Lean Startup sense) to give feed back. There are no big visible charts. There are online data sources like Jira and Sonar, but I don't know that anyone really looks at them.

Apocalypse: we're not making the progress I'm here to ensure.

Now I have some situational awareness, time to get started.