Implicit Time-Based Coupling - Inside a Class.

Imagine if you would a class in an object-oriented language. 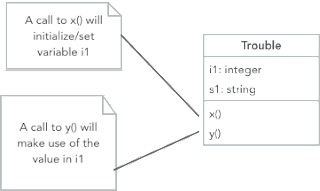 Now, a "good" user of an instance of Trouble will do something like this:


In this case the value of i1 (used by function y) is either undefined or possibly some leftover value from earlier uses of instance t.

How Do You Know?


The functions x and y have an implicit temporal binding.  When you look at the object diagram, or if you use code completion, nothing you see will tell you that you must call x before y.


Of these, I'm most afraid of 1 and 2. These are hidden dangers, and eventually there is going to be a nasty surprise for someone -- possibly the customers.

If one is working at a large scale (dozens or hundreds of people using Trouble) then 3 is asking far too much. Who can afford to carefully read the implementations of all the classes they use, and keep track of when variables are set and used? You can't afford to have 20 people wasting time on this, in hopes that they might spot the one or two special classes who rely on temporal coupling.

While it's easy to blame all "bad code" on a lack of discipline, we find that it is more productive to fix the tricky coding practices that require a high level of discipline.

You will always find it more scalable and productive to make the work easier than to work harder.

Number 4 is also a nightmare at scale. Code duplication is the king of code smells, but here people are copying code because they feel like they can't afford the time to understand the code they're producing. That's awful. I don't blame the copiers, they're in a situation where they're asked to put out effort they can't afford. But I would rather they investigated instead of copying blindly.

Number 5 is too much to ask.

Number 6 (someone told you) is not bad in and of itself. Communication is good. But here the communication is how to work around a problem in the code so that you don't have to fix it. Perfectly reasonable-sounding if you can't change the code itself, but questionable in general. How safe are you if the only thing protecting you from disaster (in the hazards of 1 & 2, or the time sinks of 4 & 5) is oral tradition.

The ideal when programming in groups and at scale is that you demand the least from each other, so that you can all accomplish the most.


At scale, you want to build code so it is easy for other people to do what works well, and avoid hazards and risks along the way.

All implicit couplings are risky, including (but not limited to) duplication of algorithms. Every fact, every algorithm, every bit of knowledge should have a Single Point of Truth in the application.

Here the design of the code is such that the "point of truth" (knowledge that x() must be called before y()) is distributed to every bit of code which needs to call function y.

It demands duplication of code in the callers, and demands a higher level of "due diligence" from the programmers.

At scale, this small feature becomes a big problem.

There usually ways to fix this problem.  There are also ways to cope with not solving it.

You can probably come up with a dozen more ways to improve the situation.

But the important thing is that we can recognize implicit temporal cohesion and its role in making code expensive to write, and that we take steps to make the work easier if we want to accomplish more work sooner.