Some days it is a struggle.

My network disconnected and reconnected a few times. That made me lose my session and have to restart.

We determined the dark background that looks great on his screen was causing trouble, and had real issues getting VS.NET to return to white background defaults. Was much harder than one would suspect.

Got some code moved and checked in, got green tests. Explored nhibernate space to learn how to do some of our specialized queries.

Noted some overkill queries. Overkill queries get every object of a given type and then throw away all that they don't need. These full-table-scans cause performance engineers and DBAs to break out in cold sweat. We're going to build/rebuild some NHibernate chops and chase these down with an axe.

Observation: almost all the NHibernate articles I found through google are tutorials on writing the XML (or appear so at a glance). Not a lot of them are about using it to do anything. I guess the tail does wag the dog sometimes, or the use is supposed to be so obvious as to be beneath need of tutorial.

Version control is your friend. We had a rename refactoring go wrong in the most puzzling way, and a nice, safe revert was deemed an attractive choice. Ron never goes backward, but Ron is not me. I go backward if it allows me to recover confidence and step forward all the more boldly next time. Sort of a "regroup".

Observation: if you're remote pairing, you can have garlic-laden foods for lunch. :-D 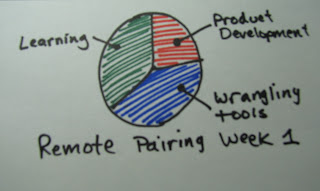 Afternoon had more application glitches than technical glitches, though we did lose audio and video a couple of times. It just wasn't our biggest problem.

We got the architecture team together and made some good progress on plotting our future data access patterns & plans. So I guess this stuff really is working. We even got some stuff done, for small values of "done."