WARNING: the blogger "WYSIWYG" editor is really not very good about the "WYSIWYG" bit... so this article looks great in the editor but is a real crapshow in the actual post. I'm fixing it. Be kind, and bear with me.

In our eLearning, we publish problems and solutions. Sometimes people contribute other solutions and we show those as well. Today's sample comes from our Test-Driven Development album. 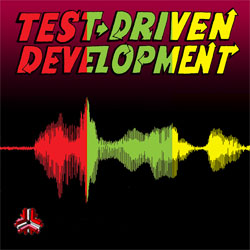 Geepaw hill tells us "everything matters" -- so today I'm going to nitpick at something that (in this case) is tiny and you might consider it insignificant. So be it.

But just the same, I would like to introduce you to a process that can improve your code and design in ways subtle and profound.

In this case, it stays a little to the subtle side, but that's okay for a blog.

Here is a source code example:

This test is checking a hypothetical phone billing calculation.

Let's look at these lines and figure out how much unique content exists per line.

56 characters of every line are duplicated. You probably didn't even read them after the first line.

About 25 characters are not the duplicated prefix.

Of these, even fewer are unique (if you drop punctuation).

With 2/3 of every line being noise, it's pretty obvious that this code is inviting you to copy and paste. Heck, it's practically demanding it.

How many times would you want to type those first 56 characters (plus indentation)?

Most of the time when people copy and paste, it's because the code asks them to do that.

I'm willing to wager a pleasant adult beverage that the four-line test was written by copying the first line three times.


Now we've got it to four points of data, and that's pretty noiseless. Do you know what it means?

Nope. I didn't think so.

This has all the noise removed, but also all the information.

If you have near-zero signal, then having low noise doesn't help.

But if you have little signal, having a lot of noise doesn't make it any better either.

The other is the expected amount of the calculation (here done in decimal because it's just a teaching example).

Now the question is how to phrase this. We are a little stymied because there are two different kinds of plans being tested here for two different conditions each. We're not going to come up with a test name that reflects that because it's a number of different ideas.

Maybe the tests are too big.


We could divide the tests into GOLD tests and SILVER tests.

We could make four different tests.

We could lean on naming.

We could add comments.

We could just look more deeply at the code...

When we look at the code we see that the algorithm is the same regardless of plan. Only some numerical values change per plan. That's interesting.

Possibly we could rework the code a bit. I'm going to take some liberties and not actually build and run this, but just examine some different organization.


There is more to this, though.


I'm not even going to talk about the primitive obsession, using floats for money, or any of the other obvious issues here. Especially not having small classes for minutes, and for money, and type-safe function parameters to keep us from shooting ourselves in the foot via mishandling of variables. Far be it from me to mention any of that. This is, after all, a training exercise.

Now we're getting closer to something that can be understood from the test. The signal is increased considerably. That's a good thing. Sadly, these numbers are going to be all over the tests and duplicated in the production code.

That violates the Single Point Of Truth (SPOT) principle, and also damages our signal-to-noise ratio.

Now we'll have numbers all over the place duplicating numbers in other places, and we'll have to be careful to ensure that they all agree when they should. Ew. We need something better.

Maybe what we need now is to create a record type to hold the variables for different rates. Let's call them GOLD_RATE_PACKAGE and SILVER_RATE_PACKAGE for now.

And then we could create constants that further exalt the DIFFERENCES in numbers, rather than just stating a number and leaving it to the reader to reverse-engineer the tester’s choices.


This could be taken further, but consider this example v. the original.

On one hand, they assertions are almost exactly the same. On the other hand, there is a huge difference in the signal-to-noise ratio and the places one has to look to research why the first answer should be 29.95.


The point of this is not "my code is better than yours" or "I'm cooler than you" (which is almost certainly false).

What I'm suggesting is that there are subtle-but-different changes even in simple code if we consider the signal-to-noise ratio in our code.

As a result, you end up with code that is more obvious at a glance and likely has a better design as well.

This matters to me because I care about the code rather deeply.

Maybe you don't like it as well as the original.

That's okay, but what do you come up with when you follow the same process?