Make People Awesome? Give Them Superpowers! 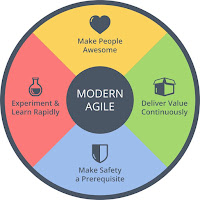 We need to explain our primary statement of benevolence, expressed as "make people awesome." This is intended to express that have an explicit goal of benefitting specific others with all of our work.

I have had so many apologetic conversations (not as in "I'm sorry" but as in "apologetics") about the term, and it's been described in several articles (some well, some rather poorly).

The message is singularly hard to express, at least in a form that fits on the sticker.

Admittedly, it's 2017. Everyone is on high alert, and words trigger people in dozens of interesting ways.

To date, the primary triggers are:
That's a lot of baggage for three little words.  Let's look at the short description from the Modern Agile website (2017): 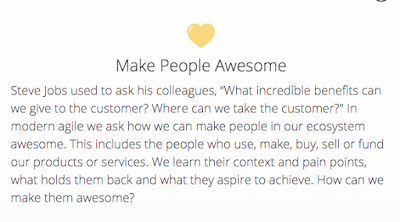 
In any longer discussion, we eventually get around to Kathy Sierra's book.  "Badass: Making Users Awesome"  which was one of Josh's inspirations.  There were a few tailorings going on, but the idea was here.

We don't say "badass" because that, by itself, is sometimes used to describe someone who is forceful and violent.  I'd be surprised if Kathy S. has not had many clarifying discussions over that misinterpretation.

We also don't say "users" in our little slogan. We believe in an overarching benevolence.  We want to make users "awesome" of course, but we also want that benevolence to extend to our teammates, managers, support people, DevOps, QA, sales. We want it to extend to our customers' customers.


Some people take "make people awesome" to be a demand that managers of development teams do not prevent the teams from being awesome. They recommend "allow" and "enable" and "accept" and "recognize" instead of "make." We're not excluding that message, but it is a message with a passive nature. We intend to imply action on our part to benefit other people.

Suggestions that we change it to something like "get out of your team's way" will limit the message to managers of teams. That is an unnecessary (and wrong) restriction of the scope.  Our intended meaning is about intentionally amplifying people's abilities through products and processes that improve the way their world sees them.

Sadly, some people take the whole statement to mean "demand that other people behave in a way that you see as awesome" -- very far from what we intend. We would have said "demand awesomeness from others" if we meant that.

Likewise "be kind" doesn't cover it.  We are not trying to "just be nice" but rather to give the people we deal with an extra measure of capability, awareness, competence, and power. We want them to be, properly "awe-inspiring" to the people they work and live around.

And now I've tripped over "awesome" at least twice.


Let me explain.  I found an old article I wrote describing software as super-powers.

The idea is that there are systems that help doctors avoid drug interactions while they are in the act of prescribing drugs. This has had a huge impact on the world. Patients have fewer complications, doctors have fewer lawsuits, hospitals have less workload due to drug interactions. Compared to pre-software-assist, doctors are impressively aware of interactions and up-to-date with new alerts because of software. That software is "making them awesome" in some regards.

The idea of making people awesome is just that - always be looking for ways to multiply other people's ability to be successful in their endeavors.

It doesn't matter if they're coding, testing, managing, performing medical services, nursing, hosting parties, supporting software systems, installing cable TV, cooking dinner, or editing podcasts. We can always be looking to "make people awesome" at the things they do for others.

Will The Phrasing Change?


I don't know that we'll always hold to the current phrasing.

A lot of work and soul-searching has gone into these little slogans. We need it to say that our actions are taken with the needs and goals and opportunities of other people in mind, not just our company or our teams or our managers. We need it to be positive, active, and inclusive of the entire product community.

We want it to be free of coercion. Sadly, there are good reasons to worry about phrasing and to react to the slightest appearance of force and privilege and oppression. We hate to be misconstrued that way and hope that people will not "embrace" the wrong meaning of the phrase.

The benefit of a doubt is apparently a scarce resource. If people assumed good intent, I think they would apprehend the meaning quickly enough.

The current emotional of the climate these days is full of oppression, suspicion, disdain, anger, and abuse and these are shared habitually and recreationally.  Even most of what is considered "comedy" these days is merely recreational anger and disdain. Offense and oppression are both habitual.

I know it's a rough world, but that is one of the problems we try to address in Modern Agile through all of the four values. I can't long for a better world without trying to make one. I wish we weren't all assumed to be a part of the problem, but here we are.

I am okay with keeping the current phrasing or with finding another way to say this that also fits on stickers and is easily memorable and meets the needs described here.

The primary problem is that some people hear the three words, and don't look past them for anything but signs of force, negativism, and oppression.  I wish they were received in trust and examined in a positive light more often.

I guess it's much easier to find reasons to be upset than reasons to be joyful and positive; maybe it's just the political atmosphere of our times.