A LeanPub book for Scrum Masters? 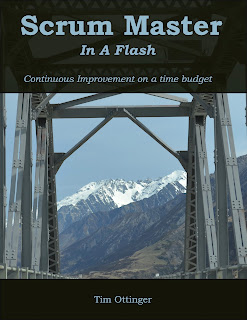 I've had a side-project that started because I've been working with dual-role (and one triple-role) Scrum Masters lately.

I appreciate how hard it is for them to be good at several things simultaneously.

Once I started collecting techniques for them, I figured I should publish it somehow.

I was thinking of a blog, but Joshua Kerievsky (our leader at IndustrialLogic) had mentioned possibly using something like LeanPub.

I really need to learn to release a product early and use feedback to guide it to be something that really addresses a market need.

I've invested some odd hours here and there on this, and have gotten some friends to look it over. Sadly, most of them who are dual-role SMs haven't had time.

Still, here is a chance for me to learn in a lean startup kind of way, releasing early and often, and let the market help me develop the product further.

I'm interested in hearing what you think of the cover, and the idea in general.

I've not settled on price or even included inside illustrations yet. If you want to pop over to the public page at leanpub, you can suggest a price.  I might make an early release without illustrations if enough people think that's a good idea.

Of course, I would release it at a lower price initially since it's not all there, or at least give coupons for people who want to be a part of this process.